The price of gold struggles to retain the rebound from the monthly low ($1851) even though the US Dollar remains on under pressure following the US election, and the precious metal appears to be moving to the beat of its own drum as it tracks the September range.

The price of gold failed to test the September low ($1849) earlier this month despite marking the largest single-day decline since August 11, and bullion may trade within a defined range ahead of the Federal Reserve’s last meeting for 2020 as the central bank is scheduled update the Summary of Economic Projections (SEP).

The fresh forecasts from Fed officials may offer a more detailed forward guidance as the central bank plans to “add two new graphs that show how the balance of participants’ assessments of uncertainty and risks have evolved over time,” and the Federal Open Market Committee (FOMC) may keep the door open to further support the US economy as Chairman Jerome Powell and Co. pledge to “monitor developments and assess how our ongoing asset purchases can best support our maximum employment and price stability objectives, as well as market functioning and financial stability.”

Recent actions taken by other central banks may put pressure on the FOMC to do more as the Reserve Bank of Australia (RBA) and the Reserve Bank of New Zealand (RBNZ) deploy more non-standard measures ahead of 2021, but it seems as though the Fed will rely on its current tools to support the US economy as Chairman Powell and Co. show a greater willingness to extend its lending facilities beyond the current deadline and vow to “increase its holdings of Treasury securities and agency mortgage-backed securities at least at the current pace.”

In turn, key market trends may persist throughout the remainder of the year as the US Dollar broadly reflects an inverse relationship with investor confidence, and the low interest environment along with the ballooning central bank balance sheets may continue to provide a backstop for gold prices as the unconventional policies heighten the appeal of the precious metal as an alternative to fiat-currencies. 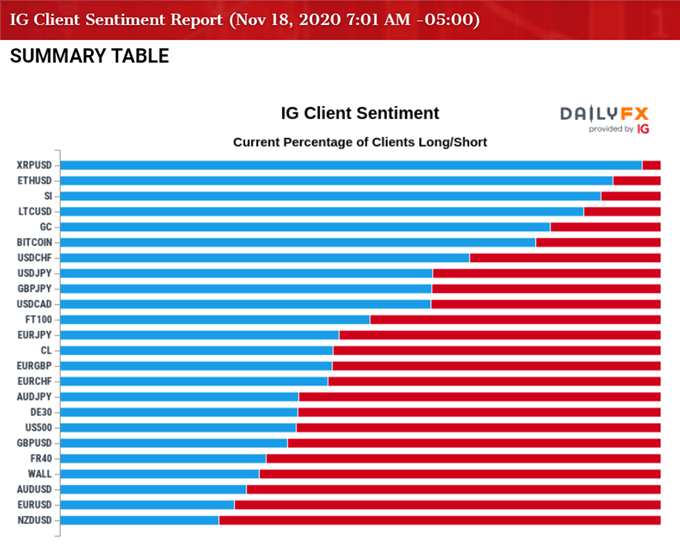 At the same time, the net-long US Dollar bias from earlier this year has resurfaced in November as the IG Client Sentiment report shows retail traders net-long USD/CHF, USD/JPY and USD/CAD, while the crowd is net-short GBP/USD, AUD/USD, EURUSD and NZD/USD.

The crowding behavior in the US Dollar has taken shape even though the Fed’s balance sheet approaches a record high, and it remains to be seen if the correction from the record high ($2075) will turn out to be a change in market behavior or an exhaustion in the bullish trend as the price of gold no longer traders to fresh yearly highs during every single month in 2020.

With that said, the price of gold may trade in a defined range ahead of the FOMC interest rate decision on December 16 as bullion appears to be moving to the beat of its own drum, and the precious metal may stage another failed attempt to test the September low ($1849)