NZD/USD fails to retain the opening range for December as it trades to a fresh monthly low (0.7006), and looming developments in the Relative Strength Index (RSI) may offer a textbook sell signal if the oscillator falls back from overbought territory and slips below 70.

NZD/USDextends the series of lower highs and lows from the yearly high (0.7104) as the US Dollar appreciates on the back of waning investor confidence, but the break above the June 2018 high (0.7060) instills a constructive outlook for the exchange rate as key market trends look poise to persist over the remainder of the year.

In turn, swings in risk appetite may continue to sway NZD/USD ahead of the Federal Reserve interest rate decision on December 16, and it remains to be seen if fresh updates coming out of Asia/Pacific will influence the exchange rate amid fears of a protracted recovery.

The update to China’s Consumer Price Index (CPI) is expected to show the headline reading for inflation holding flat in November after expanding 0.5% per annum the month prior, and signs of subdued price growth may become a growing concern for major central banks as they rely on their non-standard tools to achieve their policy targets.

In turn, the Reserve Bank of New Zealand (RBNZ) may keep the door open to implement a negative interest rate policy (NIRP) as Governor Adrian Orr and Co. warn that “inflation andemployment will remain below the remit targets for a prolonged period,” and the central bank may continue to strike a dovish forward guidance at its next meeting on February 23, 2021 even as Deputy Governor Geoff Bascandreveals that the board plans to issue a decision regarding loan-to-value ratio (LVR) restrictions in February 2021.

Until then, key market trends may influence NZD/USD as the US Dollar broadly reflects an inverse relationship with investor confidence, and the New Zealand Dollar may continue outperform the Greenback even though the crowding behavior from earlier this year resurfaces. 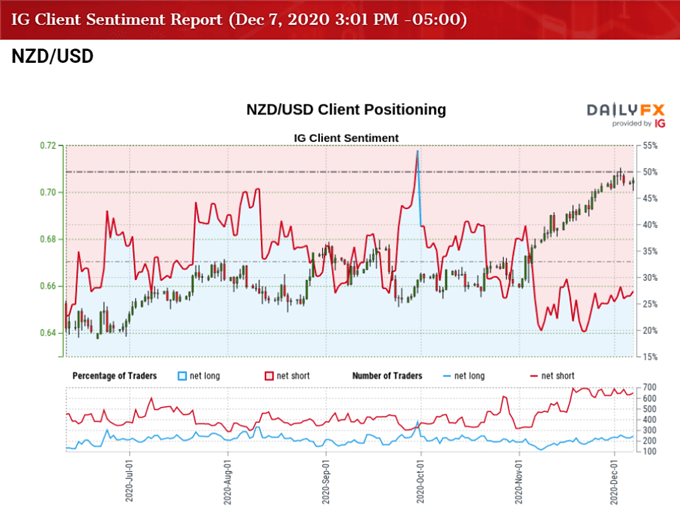 The decline in net-short position could be a function of profit-taking behavior as NZD/USD bounces back from a fresh monthly low (0.7006), while the small adjustments in net-long interest has done little to alleviate the tilt in retail sentiment as 26.64% of traders were net-long the pair at the end of November.

With that said, swings in risk appetite may continue to sway NZD/USD as key market trends look poised to persist throughout the remainder of the year, but the Relative Strength Index (RSI) may offer a textbook sell signal if the oscillator falls back from overbought territory and slips below 70.